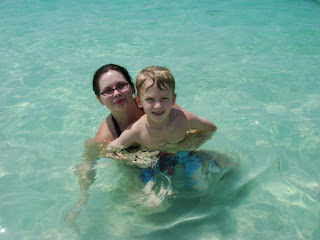 On Monday, my sister, her friend, and friend's two kids showed up for, what turned out to be, a very short visit. As soon as they got here (after driving all night), we decided to head out for Destin, FL for some beach time! The weather was gorgeous, and the waves were calm. After 4 or 5 other trips to the beach, this was the first time I was actually able to get Matt into the water to enjoy it. YAY!
(Matt, contemplating getting wet) 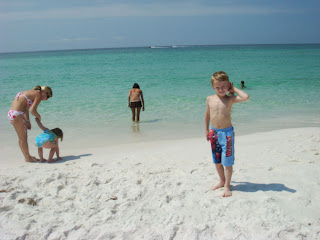 (Aunt B and Matt) 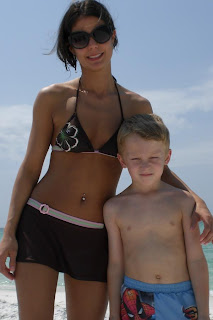 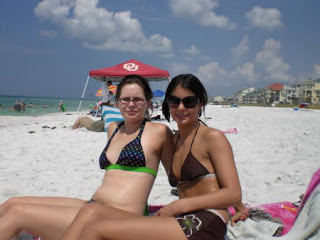 (salt water on the glasses- not so easy to see through!) 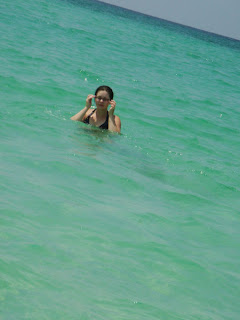 (finally brave enough to go under) 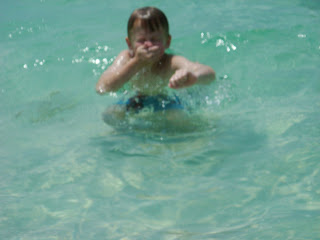 There are some baby gators chilling on the little docks and stuff in the water... this was at Fudpucker's for lunch. Matt got brave enough to touch one of the little ones, that had it's mouth taped shut, but they wouldn't allow me to take any personal pics of it. But... karma is a b!tch... right after making me put my camera up, the guy holding the gator got peed on by it.... Ohhh yes- too funny! Matt was super amused. 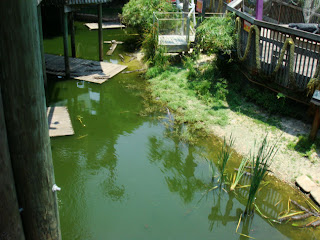 We wasted the next day at a local pool that serves double as a mini-waterpark! The first few times Matt walked up the path to the top of the waterslide, he promptly ran back down scared, but he finally got brave enough to go down a few times! 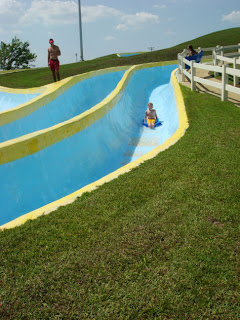 Posted by TaraJ at 10:54 AM 4 comments Links to this post

New task- until it's done:

GET RID OF ARMADILLO THAT LIVES UNDER THE BACK PATIO!!!!!!

Taking this piece of advice : "If you have an armadillo under your foundation, you may need to take additional steps to make sure your visitor leaves and does not come back. The best method is to build a “trap door” that will allow the armadillo to leave, but will not let it back into the burrow. A heavy cloth or lightweight section of wire mesh fencing placed over the hole and secured loosely at one side should allow any armadillo still inside the burrow to push its way out, but it wouldn’t be able to re-enter very easily. Combining the trap door with something smelly ought to double your chances of a successful removal."

Have secured one side of a small piece of leftover chain link fence over his burrow... would be nice to get him out in the next 8 days before we put up the other side of the fence and he's stuck in the yard LOL

Posted by TaraJ at 4:43 PM 1 comments Links to this post

No sewing this last week- it's been a little busy!

We'll have family visiting until Friday , so it will probably be another week or so before I'm able to get back into my groove :(

Posted by TaraJ at 11:43 AM 0 comments Links to this post 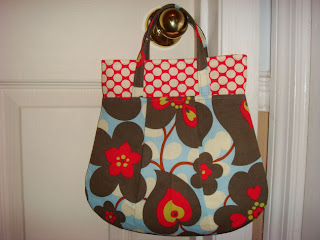 For my birthday last Sunday, I went on strike... So I spent the evening sewing! And I ended up with this- a new handbag. The pattern is from Amy Butler and can be found here ! While I do love the pattern, I made a few adjustments (actually, I followed the pattern for the exterior, and while I used the pattern pieces for the lining, I added and took away from that on my own). And the handbag is a bit on the small side. I guess b/c I'm used to carring a larger tote or satchel purse, this just seems small to me, although all of my normal purse stuff fits in there just fine! I may just redo it using the shoulder bag patter :P I even have enough of the fabs left to do it in the same ones... hmm maybe I should reverse the print and polka dot? :D

Posted by TaraJ at 1:06 PM 2 comments Links to this post 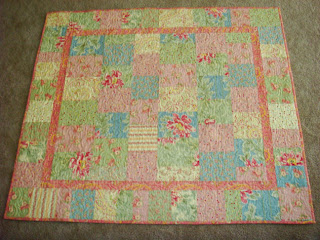 This is a baby gift for a friend of mine, due in July, obviously having a little girl. Her baby shower is tomorrow, and right on time- I finished the quilt today!

It's a very simple pattern, just blocks. It's a simplified variation of a free pattern available on Amy Butler's website (though the name escapes me right now, and I'm too lazy to go look it up!)

Quilting is just free hand loops/swirls, done on the midarm. It's a pretty simple thing to do, but I love the textured effect that it gives over all. I think the next time that I try out this type of quilting design, I'll spread it out some- this ended up fairly heavily quilted. 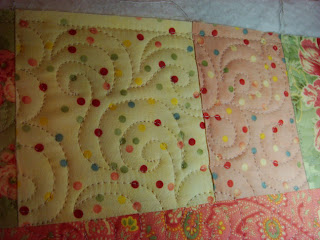 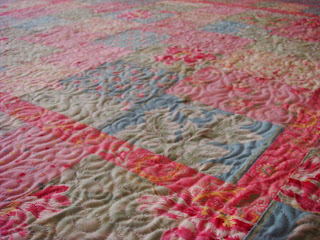 Posted by TaraJ at 5:27 PM 1 comments Links to this post

I have a baby quilt that has a deadline of Sunday- when I'm attending a baby shower where the quilt is part of the intended gift. I'm doing good time wise. A few more passes with the midarm, and the quilting will be done.

Posted by TaraJ at 8:15 AM 1 comments Links to this post

Finish #1- completed in early March... center came from an online group's round robin a few years back... I took off some outer borders to make it baby size... was a practice piece for the midarm. Not the best stitching, but it works... sitting on the closet floor LOL! 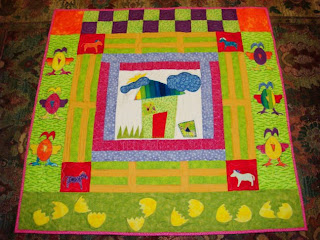 Finish #2 - completed mid-March. Basket UFO from a few years ago, top was completed in Germany. 2nd on the midarm, stitching improved some... good enough to hang on the living room wall! Pic was before binding, but the binding fab is the same as the border fab, so no difference really. 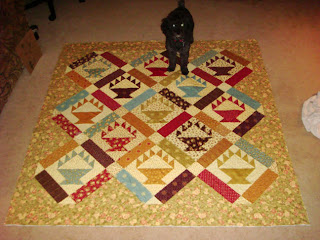 Finish #3- Quilt of Valor from online group. A few ladies contributed blocks, then I made a few more to have enough... I set it and quilted it. I'm horrible and it's still sitting here in a box, all ready to be mailed out! (Going to get to that this week!) 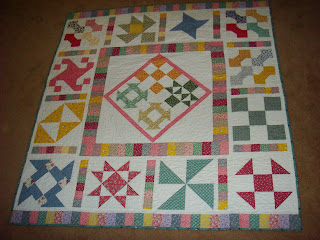 New project- Individual challenge from online group. We each started with our own orphan block, and get a new 'challenge' every month for the next border! I still need to sew that last border together and to the rest of the quilt! 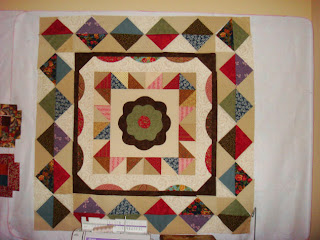 Posted by TaraJ at 7:14 AM 3 comments Links to this post

I am a HORRIBLE blogger! So horrible in fact, that I forgot how to get to my blog and had to just spend 15 minutes resetting various passwords to get in here- oops!
So, basically, I started off the year planning to use this place to keep track of my quilty progress and life, and then forgot about it... so goes my life it seems. We've had LOTS of changes since the beginning of the year! 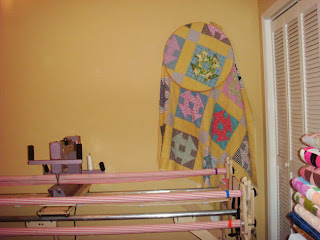 Jan and Feb were nice and normal, nothing out of the ordinary too much. In March, my new midarm and frame- a Nolting Fun quilter (purple, thanks much!) and Hinterberg stretch frame- were delivered and set up. Sadly, I haven't gotten to play on them as much as I would have liked, but I have managed to get 3 quilts done on them so far, with lots of near completed tops to be done in the future! The thing that really got in the way of quilting so far this year though, was house hunting! And then moving... again... and then the unpacking... again- ick! But we're finally mostly settled in, minus some minor work (redoing a bathroom- just cosmetics, and yard work, and putting up a fence). 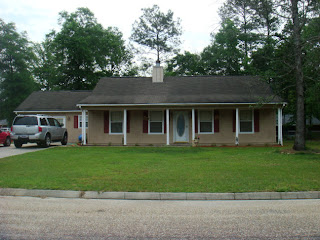 Other changes: Matt has now completed kindergarten! He ended the year with wonderful grades (as far as grading kindergarten goes - all Ms and Es) So, now we're officially parents of a FIRST grader- man, that makes me feel ooooooold! We've also added to the family... with the death of Matt's beta, Mr. Fishy, in March, Matt decided that we needed to replace a fish with a CAT! Big adjustment for the hubby, who is a self professed feline hater... but he's warmed up. So now, instead of having 2 people, and 2 dogs in bed at night, we also have added a cat some nights (though usually Coby chooses to sleep on the dining room table).

I promise to try and be a better blogger!!!!

Posted by TaraJ at 7:01 AM 1 comments Links to this post