On the diaper tote pattern, that is!

I have it hand written out, but want to take some pictures to include and run through it first! Maybe find some testers...

I'm on it though!

Now to think up a fun name for my patterns...

Posted by TaraJ at 6:39 PM 1 comments Links to this post

Because it is DONE! 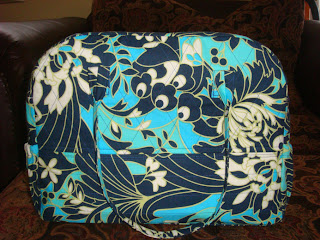 I added 4 large open pockets to the lining, but wanted to leave most of it open space. Lining is also interfaced for stability. 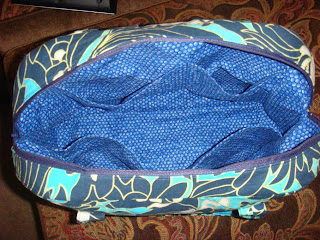 I've got plans to do a few more of these as gifts for expectant mothers, and will probably pack them with baby lotions and soaps and such.
So, would anyone be interested in the pattern? Since I'll be doing it a few more times, I can write down what I do and take pictures...

Posted by TaraJ at 9:41 AM 4 comments Links to this post

Houston, We have Handles!

Just a bag update. Still need to do the lining, probably tomorrow! 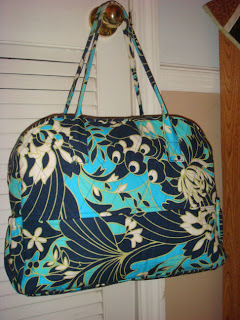 Posted by TaraJ at 6:31 PM 0 comments Links to this post

In a baby crafting sort of mood...

Nope, I'm not pregnant (yet!), but a few friends are! So, decided I should get to work on a pattern for a tote/diaper bag. Work the kinks out, and get a few made!
I liked the look of some patterns/totes online, but wasn't willing to shell out the money. So, yesterday I sat and drafted my own pattern, quilted some fabric and got to cutting!
So far, I'm loving it! I need to make and sew in a lining still, and do handles (probably before the lining! haha) 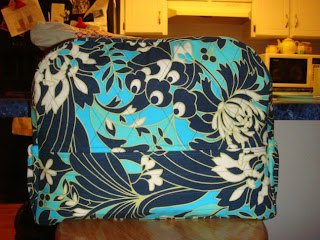 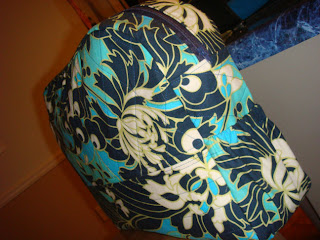 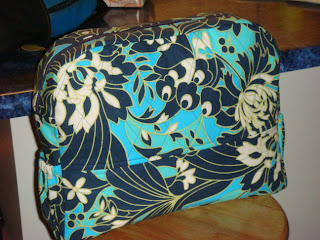 Posted by TaraJ at 7:34 AM 1 comments Links to this post

I sewed today! For most of the day actually, and man- it was great. I still have to finish folding laundry though haha.

This will be a baby quilt- don't know for who (maybe ME if all the trying works and ends up as a girl, sooo I'll just hold on to it for awhile!). Just need to finish that outside border. The inner border is more yellow-ish than the rest of the creams, so when all is said and done, I'll probably tea dye the entire thing to even it out. But I love that the little pink leaves in the inner border fab are just the perfect shade of pink! 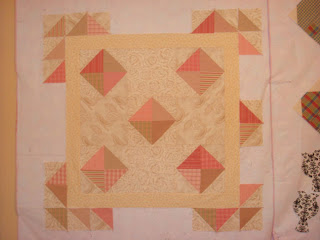 This is a gift... which is why I'm only showing one corner. But, as of today, it is a top. I just need to get some batting ready and sew together a backing, ahhh- love it! 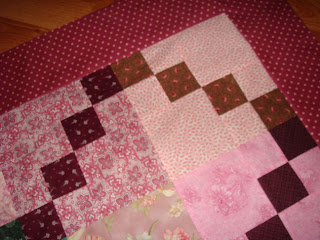 Posted by TaraJ at 5:21 PM 0 comments Links to this post

Oh, I rarely give up on a quilt, but after several weeks of fighting with that Christmas-ish quilt mentioned a few posts below, I did!

For starters, I didn't receive the whole amount that I'd ordered of the backing fabric, so I used the pieced bit bordered by the wide back. The wide back was surprisingly thin, and stretchier than normal... a disappointment, but it was on sale, so I used it anyway- maybe my first mistake.

Anyway, after quilting 2 rows of feathery pattern, I decided that I didn't like it- so picked it out. Then picked out another half row of unsatisfactory quilting. After that, the backing was pretty stretched out, and I wasn't liking it. I quilted a bit, then cut it up.

It's not a total failure, though. I have big plans to turn it into Christmas stockings for small gifts next year. I guess it isn't really giving up, just 'repurposing'!

Moving on to the next UFO now!

Posted by TaraJ at 8:42 AM 0 comments Links to this post

Ok, so for the next few weeks or so, I have LOTS of free time!

3) gender neutral baby blanket for friends who are expecting their first!

4) 'Spring' clean - even though it's January

5) organize the 'crap closet' where everything lands (holiday decorations, footlockers full of military gear, boxes that haven't been unpacked in 3 moves haha)

6) generally declutter- this probably should include my sewing room...

Posted by TaraJ at 8:03 AM 0 comments Links to this post 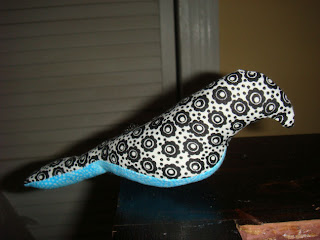 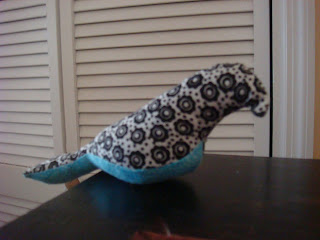 Using this pattern: Spool Sewing
I have big plans - namely, a mobile. Also from a picture on that sight, using sticks and several of the stuffed birds.
Looking again, I see that they didn't stuff the tail of their birds, so next I might test one outthat way- for the first one though, I stuffed that sucker totally full! I don't mind plump little birdies! In any case, I plan on making this little guy some friends. Planning on sticking with a black/white and bright theme... maybe with white sticks? Hmmm
Why a mobile? Well... we're now officially 'trying' for #2! So, in efforts to be somewhat prepared, I'm starting to make stuff NOW- just neutral stuff. I didn't sew 7 years ago with kiddo #1, so I'm all excited about the possibilities now.

Posted by TaraJ at 11:18 AM 1 comments Links to this post 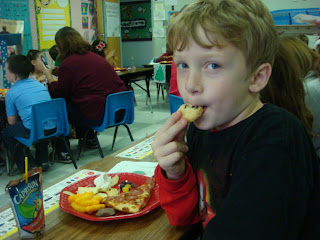 Christmas: Presents out the wazoo! We took a year off from traveling cross-country, and stayed home. Just the three of us + pet- totally relaxing, and worth the cost of shipping presents to extended family! 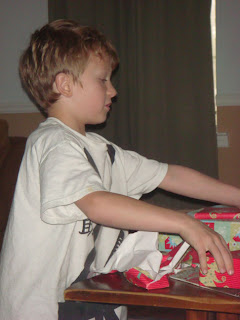 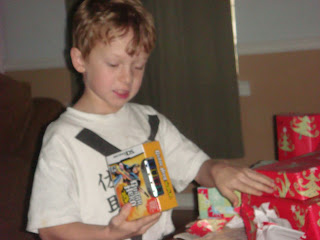 Then came the company! Picked up a friend and her son locally on the 29th, then the next day, took off down to the coast to pick up another friend! I love having friends that travel to US!
New Year's Eve: more company! I'll let you guess which pic started the night and which ended it haha! 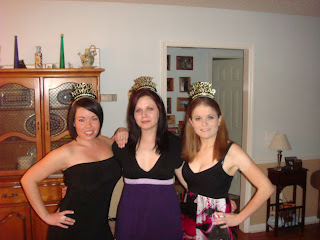 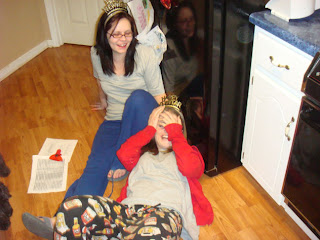 Post New Years: still have company! A bit of hanging out, took the kiddos to the Army Aviation Museum- Matt always loves it. Oh yeah, and on the 3rd, Matt's 7th birthday party- MORE company! 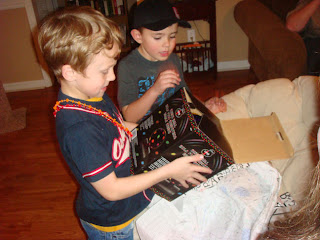 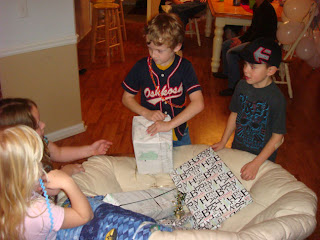 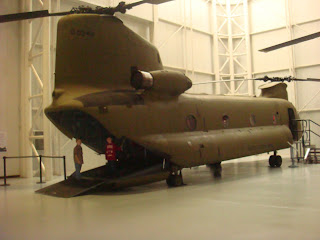 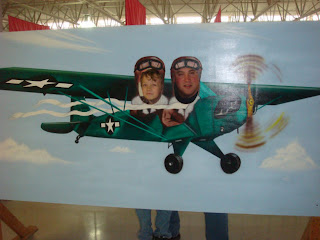 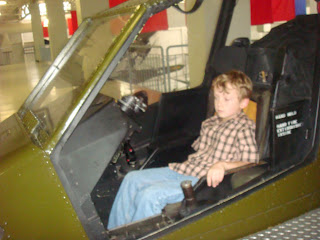 This week: Basketball season kicked off in full swing Monday with kiddo's first game! They lost, but had a blast! Tuesday and Wednesday were spent making return airport runs and getting the company off on their merry way. Now I'm helping my house recover from a week's worth of twice as many people, and enjoying the quiet! 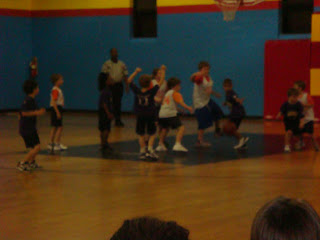 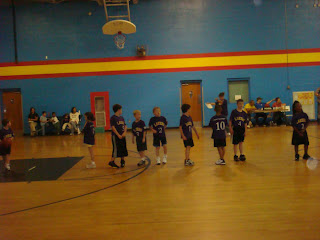 Obviously, I am in SERIOUS need of some quilty goodness!!!

Posted by TaraJ at 8:02 AM 0 comments Links to this post

to everything soon! Sewing, relaxing... ahhh.

The holidays were good, but we've had company for a week, and they won't be heading out for a few more days, so quilting is on the back burner.

Posted by TaraJ at 5:10 PM 1 comments Links to this post