I haven't been up to much sewing the last week or so because I've been feeling a bit blah, but I am still around and kickin'!

Posted by TaraJ at 3:10 PM 1 comments Links to this post 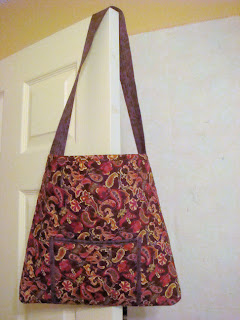 I had started quilting this leftover fabric a month or so ago out of boredom, and it ended up being a tote. Nothing fancy, but it gave me something to do!

Posted by TaraJ at 7:45 AM 1 comments Links to this post

So this project started as a UFO... originally intended to be a baby boy quilt for commission, but it was in process when hubby was injured during deployment, and never got finished (customer understood, no biggie!)... now I was in need of a baby girl quilt for a friend who is expecting... what to do? Repurpose!!! A stack of light green bowtie blocks became this... 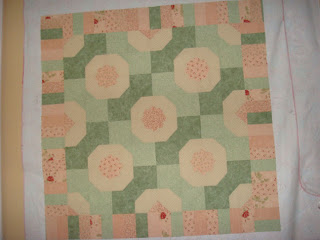 The only batting I have on hand is poly... which I'm not a huge fan of, but it's here, so I'll use it. I'm not fond of the fluffiness (and this is the lowest loft poly I could find), because, in this case especially, it seems like some of the fabric pattern is lost. Ah well- it's not one I'm keeping anyway!

I do think, though, that it turned out nice and girly enough... sort of cottage garden-y... but definately for a little girl with the pink! 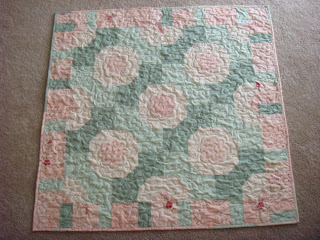 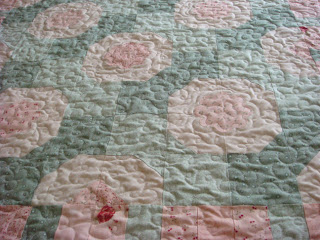 And, in efforts to use stash and keep my (or hubby's, whatever :P ) money, I used the same fabs for a pieced backing... I don't really do pieced backings, but figured that a small baby quilt was the best place to start. Oh, and the binding is pieced... the strips came from the excess backing that I cut off... man, I rock! 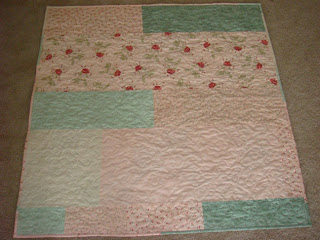 Posted by TaraJ at 8:22 AM 1 comments Links to this post

Project for the day...

Out of total boredom (it was a dreary, rainy day) and wanting something to do... I came up with a new project for the day... quilted cards! Ahh, finally, something to do with all those blank cards that I bought on a whim... Well, something besides letting kiddo color all over them! 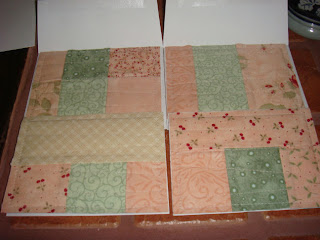 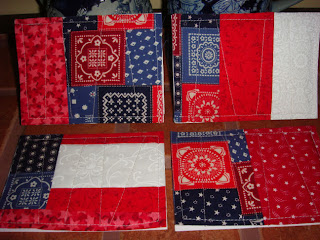 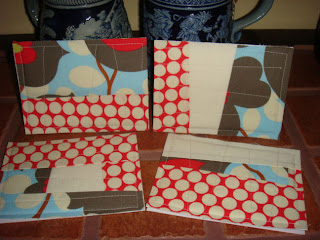 P.S... I also got bored and am currently experimenting with Etsy! In the right hand nav, you can find a link to my Etsy store where all these notecard sets are currently listed.

Posted by TaraJ at 6:13 PM 2 comments Links to this post

Quilt of Valor, by Quilter's Anonymous 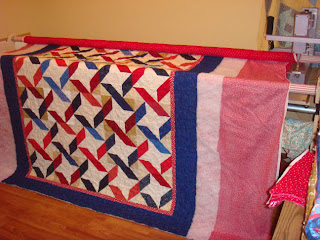 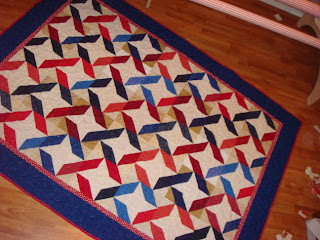 I completed the quilting on this project late last week, and the binding too. The top was assembled from various members who sent in blocks to one lady, who put them all together and bordered it. My part was the quilting and binding. I chose to repeat the same loopy quilting that I did on the Jacob's Ladder, mostly because it was quick and easy! Same thread as well, the varigated red/white/blue.... that thread was provided to me by another quilter as a contribution to our efforts, so I figure as long as it'll flow with the QOV tops, it'll get used!

How neat when something comes together so well!

Posted by TaraJ at 9:21 AM 2 comments Links to this post

Ahhh... the sound of relief! 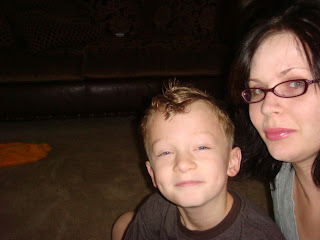 And... summer vacation is officially over! Kiddo started first grade today, and it was amazingly quiet in my house.. ahhh.... Poor kiddo though, 1st grade and he's already on his third school! He attended preK at a DODDS school in Germany, kindergarten on post at Ft Rucker, and since we no longer live in government housing, a new public school this year.

In preparation, Matt got a haircut yesterday... that's right... a faux-hawk. What a kid! 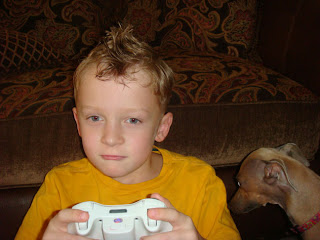 Thankfully, as seen below, he decided to wear his hair 'flat' today, and save the crazy hairdo for the weekends! 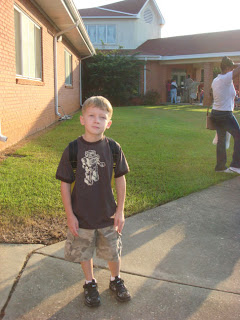 Posted by TaraJ at 4:36 PM 1 comments Links to this post

And summer vacation is almost over!

Tomorrow is Matt's 1st day of 1st grade, and we're both pretty excited! In preparation, we bought new socks today, and Matt got a hair cut. With gel, we can form a mohawk, which he says totally rocks, and ... if the school doesn't like mohawks, we can comb it down into a normal haircut- dual duty!

Quilting has been taking a back seat, but I've got big plans for this afternoon to load a group QOV that a friend mailed onto the frame and get that ready to go!

I think I'm going to make plans to gift quilts for Christmas this year, at least to the people who will appreciate them (the ones who won't, can get generic, unthoughtful store bought gifts b/c I'm not wasting all that time and creativity!) Our plans for Christmas are to stay home this year, and celebrate here in our first house! As far as I know, no family will be here then, though some might be here end of Nov-early Dec for an early celebration... yes- I like to plan ahead LOL! Crap... which reminds me- my mom wants a tree skirt made before Christmas... guess I should work on that sometime!

Posted by TaraJ at 12:19 PM 0 comments Links to this post